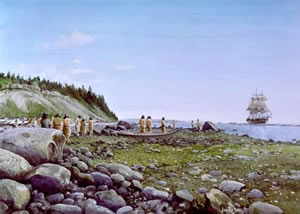 First recorded contact by the Europeans with First Nations people in this region occurred at the ancient village of Tsa-Kwa-Luten, “the gathering place” on Quadra Island, by Captain George Vancouver in 1792. His orders included a survey of every inlet and outlet on the west coast of the mainland, all the way north to Alaska.

At that time Tsa-Kwa-Luten was inhabited by the Coast Salish peoples. After the British explorers arrived, approximately in 1841, the Salish abandoned Tsa-Kwa-Luten and the surrounding villages and headed south. 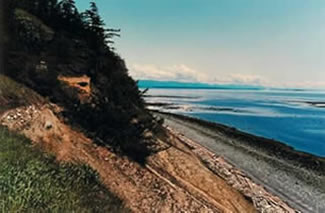 The Laichwiltach peoples moved in and took advantage of the rich salmon fishing grounds and the strategic trading position offered by the narrow Discovery Passage. About that time the Laichwiltach peoples were made up of the We-Wai-Kai of Cape Mudge, Wei-Wai-Kum of Campbell River, Walatsama of Salmon River and Kwiakah of Philips Arm.

Villages were established in Campbell River and at Cape Mudge on Quadra Island, making this area the southernmost territory of the Kwak’wala speaking peoples.